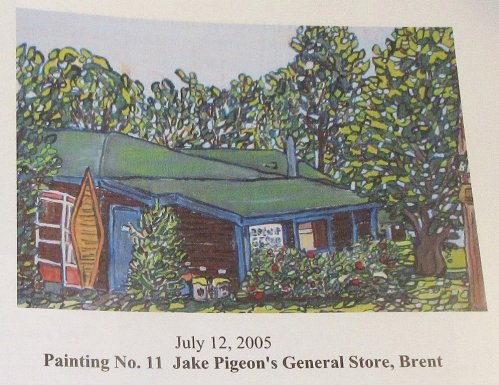 Just when I thought the heat had peaked, we hit 42 degrees Celsius today. I decided it was too hot to be on the water, so I went “downtown” to the store in Brent. Now this store certainly has a lot of history and Jake is just the rarest of jewels when it comes to decent folks.

I sat up outside the store to capture the aging facade. I included the area through the open doorway as well as the path to the dock and cabins. There was a beautiful old rosebush there. The same heavy perfumed variety grew in my mother’s yard back home in Barry’s Bay. I thought that the deep fuchsia pink would be a nice contrast to the greens and browns all around it.

The building was long and sprawling like it was never completely finished. It had dark brown siding with a stark cobalt blue trim. Oddly enough, the colours struck a balance of relief against the bright, endless blue sky and dominant greens. I started around 11 am and finished at 2:30 pm. Despite using an umbrella clamped to my French easel, I was still hot. I met quite a few curious and interested onlookers, which is usually a pleasure, since they just peek and don’t bother to speak. The children are especially curious and sometimes it’s hard for the parents to pull them away.

When I finished, I showed the work to Jake and he immediately took me into his home. There he showed me the work of other artists who over the years had found his store a worthy subject matter. After a word of thanks, I promised to mail him a mechanical reproduction when I arrived back home.